An immersive performance-game modeled on the United Nations, held at La Générale in Paris during COP21. Instead of reaching a political agreement, the participants were asked to reach an agreement while collectively cooking! Eroles Project invited participants to bring a vegetable to the ‘UN Canteen’, the weight of which would determine their assigned nation during the game. Each nation had different levels of power which defined what and how they could cook, (ie. the time they had and if they had access to spices or not) drawing parallels between their nation’s past and current political situation, and how vulnerable they were to climate change in the short term. Throughout the course of evening various natural disasters and political disturbances changed the rules of the game meaning that when a tsunami hit one nation their cooking time reduced and their number of forks or plates halved. Eroles Project performed like UN facilitators, documenting the process and over dinner time (some people sharing plates!) feedback surprising moments of collaboration and competition. After the game La Générale was buzzing with conversation as people made links between their experience and the political sphere. 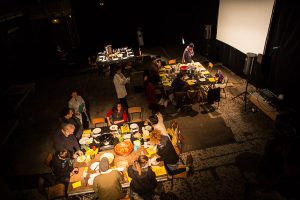 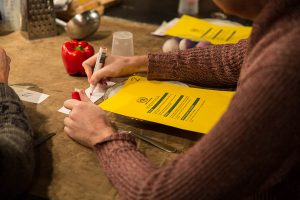 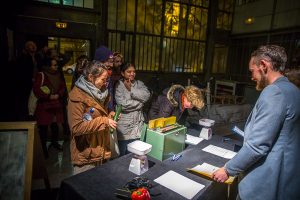